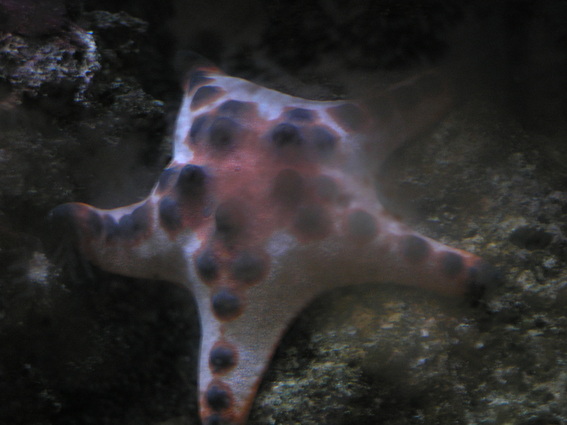 The Chocolate Chip Sea Star is characterized by a heavily calcified body wall with large, pointed nodules growing on its dorsal surface. The main body is usually red, brown or orange in color withe the nodules being dark brown in coloration. The Chocolate Chip Sea Star has a water vascular system that it uses for locomotion, feeding, respiration and waste transportation. It moves by contracting muscles to pump water in and out of its numerous tube feet on its ventral surface. The mouth is located on the ventral surface of the body and they feed on microorganisms found on substrate. In order to ingest the food, the sea star extends its stomach over its food that secretes digestive enzymes to break the food down before being engulfed. The Chocolate Chip Sea Star has separate males and females and breeding is occurs when many individuals aggregate and spawn large quantities of sperm and eggs into the water.

The Chocolate Chip Sea Star can be found among the substrate of coral reefs.

The Chocolate Chip Sea Star is a species that is often collected from the wild for use in the marine aquarium trade. Specimens are also dried to be sold as decorative accessories. Their unique ability to regenerate lost body parts is also of interest to scientists.