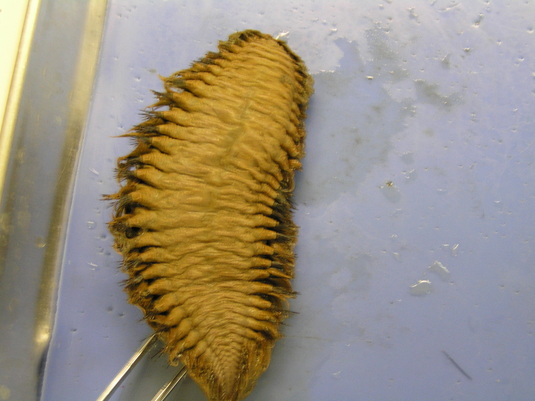 The Sea Mouse is an oval bodied worm that reaches a length of around 10-20cm and a width of up to 6cm. The most distinguishing characteristic of the Sea Mouse are the numerous bristles that cover its dorsal surface.  These bristles normally have a red sheen to serve as a warning to potential predators.  Depending on the angle of the light that hits the bristles of the Sea Mouse, it may also appear an iridescent blue or green color. Lying beneath the bristles is a layer of scales; a characteristic of all members of the family Aphroditidae. The ventral side of the Sea Mouse forms a flat, rigid sole. They are scavengers and eat the remains of dead and decaying animals that they find along the sea floor.

The Sea Mouse is found in the North Atlantic, North sea, Mediterranean and Baltic sea. It can normally be found buried head-first in the sand at depths of over 2,000 meters.

The manner in which the bristles of the Sea Mouse can reflect and absorb light is of interest to the scientific community in regards to photonic engineering by an organism.  It is said that the effect produced by the spines is able to perform more efficiently than optical fibers made by man-kind.