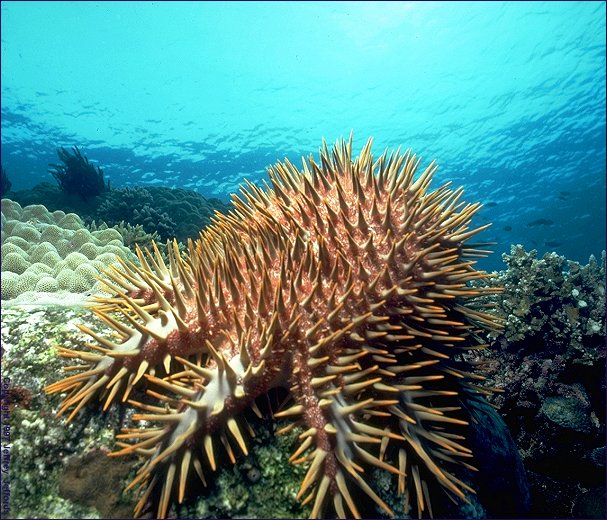 The Crown-of-Thorns Starfish is a large starfish that can grow to more than 1m in diameter. It is named from the long, sharp, venomous spines that cover its entire dorsal surface. It can have between 7 and 23 arms that radiate from a large central disk. it is usually brightly colored and highly visible from above. The Crown-of-Thorns starfish is a notorious hunter of coral polyps, particularly those of reef building corals. It feeds by a method known as eversion in which stomach is forced through the mouth and wrapped around the coral, secreting digestive enzymes and absorbing the digested tissues. Population booms of Crown-of-Thorns Starfish can have devastating effects on coral reefs. Reproduction occurs sexually and typically occurs between December and April.

The Crown-of-Thorns starfish is found throughout the Indian and Pacific Oceans inhabiting coral reefs composed mainly of stony corals.