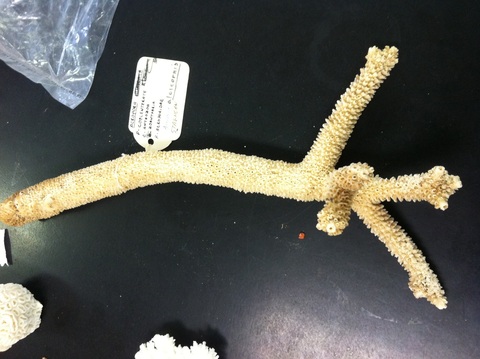 The Staghorn Coral has tentacles in multiples of three. At night, the fingerlike tentacles of the corals emerge by pumping themselves full of water. The Staghorn Coral grows antler-like branches so that it's polyps are reaised above the sand. They also have nematocysts (stinging cells) on their tentacles used to help the coral obtain food (planktonic animals).  The Staghorn Coral reproduces both asexually and sexually. Larva are able to develop and float away to disperse the coral species to a suitable environment. In addition to catching their own food, the Staghorn Coral also forms a symbiotic relationship with zooxanthellae to supply them with nutrients for growth.

Staghorn Corals are found in warm water marine environments. They are a key species for reef building in the Caribbean and Great Barrier Reef. Corals also require a hard surface to attach themselves as well as very oxygenated water.

Staghorn Corals house many creatures, some of which may be useful to the medical research field in finding a cure for certain cancers and viruses. They also provide and vital importance in stabilization of coast lines and reef ecosystems that humans depend on.