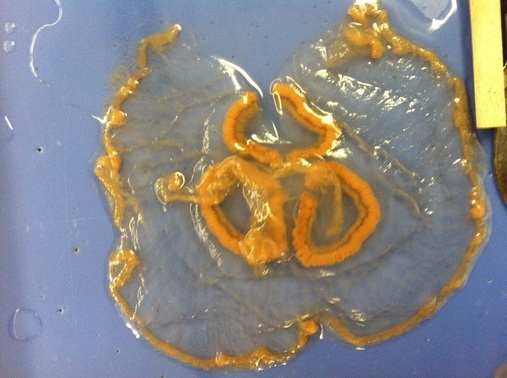 The Moon Jellyfish has a bell that ranges from 5-40cm in diameter. Their coloration has been described as delicate and exquisite in patterns of streaks and spots. Locomotion occurs through pulsations of their bell that moves water behind them. A nerve net sends signals telling the bell to contract and relax. They swim horizontally through the water in order to keep the bell near the surface at all times. This action allows the stinging tentacles to have the best opportunity to catch food items that pass by. They typically feed on plankton, mollusks, crustaceans and various other small invertebrates. Reproduction is done through distinct male and female individuals and is sexual.

The Moon Jellyfish can be found near the coast in warm, tropical waters. They are usually found in huge numbers.

Although they play a role in maintaining a stable environment, the Moon Jellyfish has no known importance to humans.