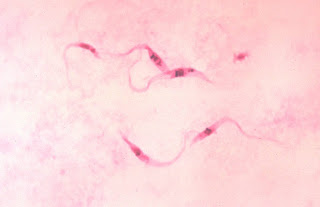 T. cruzi are flagellated organisms that have one nucleus and a kinetoplast that gives rise to one mitochondrion and its DNA. They reproduce asexually through binary fission. They are internal parasites and one stage of their life cycle inside the tissues of vertebrate hosts. Their intermediate host is the Triatoma infectans, and carries the infective cysts to suitable vertebrate hosts. The infectious stage develops inside the insects digestive and is released through the feces.

Intestine of insect vector and blood/tissue of vertebrate host. They are found where both hosts are in contact with each other in Central and South America.

T. cruzi is known to cause Chagas Disease in humans. The point of infection where the insect host bites the human host is referred to as the "kiss of death".

"Trypanosoma cruzi". The Kiss of Death: Chagas Disease in the Americas. Retrieved from: http://www.uta.edu/chagas/html/biolTcru.html.