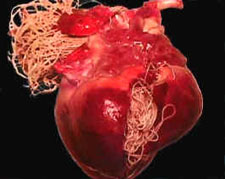 The heartworm is a cylindrical white nematode worm. It has a cuticle with three main out layers made of collagen and other compounds that protect it from the digestive enzymes from the host. They have longitudinal muscles that run the length of its body used in locomotion. There are distinct separate sexes in heartworms.Males measure between 12 to 16cm while the females measure 25-30cm in length. The male has a seminal vesicle and testis while the female has an ovary and oviduct. Both sexes have a mouth, esophagus, anal pore, excretory pore and nerve ring. Females produce pheromones to attract near-by males. The male coils around the female around the genital pore. Males us spicules to hold the female during copulation. Larvae feed on the cells of the malpighian tubes in its mosquito intermediate host. Adults feed on the blood and nutrients of its definitive host.

The heartworm can be found in southern Europe, India, China, Japan, North and South America, and Australia. Intermediate hosts consists of several species of mosquitoes and the definitive host varies between dogs and sometimes cats.

Since humans often keep dogs and cats as pets, heartworm infections are of importance to veterinarians. In heavy infections of dogs and cats, the worms can cause circulatory distress and even death in some cases. Rarely, heartworms can infect humans by accident and begin to develop nodules in the lungs or other subcutaneous tissue.