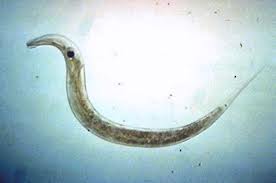 The pinworm is a small, white nematode worm that uses humans and other animals as it's host. It is called the pinworm because of its tapering shape and pointed tail. It has a direct life cycle and involves fecal-oral transmission of eggs containing infective larvae. Eggs are deposited around the anus where they may be dislodged and potentially ingested by the host. Adult worms tend to congregate around the ileocoecal region of the gut and attach to the mucosa layer. They feed on intestinal content and bacteria.

Depending on the the species of pinworm, they can infect a wide range of hosts from humans to millipedes. They are internal parasites and live in the gut of the host.

A species of pinworm called E. vermicularis is the most common worm found in humans world-wide. They can be found in group infections in children and families. If worm burdens become too heavy, they may damage the intestines of the host.Infections are characterized by intense perianal itching and heavy infections can cause restlessness, irritability, anorexia, insomnia, bed wetting, nausea and vomiting.