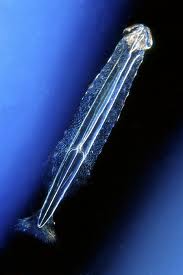 Arrow worms are small marine invertebrates that have a long, lean body with lateral and caudal fins. They are transparent in coloration. They have chitnous spines around their mouth, which can be retracted under a hood. They feed on other small invertebrates such as copepods and elevins. They are hermaphroditic and fertilization is internal. Development in direct.

Coastal watgers of the Mediterranean Sea and Atlantic Ocean.

Arrow worms are of no known importance to humans, but they have been subject to recent studies to try and determine their correct classification.