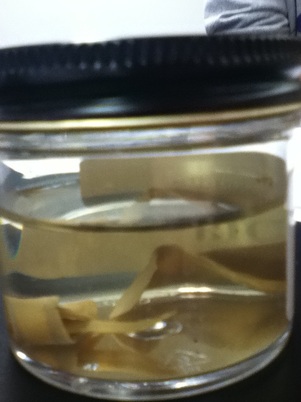 The liver fluke is a species of parasitic flat worm that infects mammals. They are able to produce both sexually and asexually. Adults live in the bile ducts of a mammalian host. Adults are hermaphroditic and are capable of both cross-fertilization and self-fertilization depending on the ability of other liver flukes within the same host.  Eggs enter the gut of the host and are passed out of the host through the feces.  The eggs hatch in water into free-living larvae that must find a suitable snail host within a few hours.  Once inside the snail, the free-living larvae develop into a sporocyst. The sporocysts reproduce asexually to produce cercaria larval offspring. The cercaria larva exit the snail host and attach themselves to some sort of object withing their environment and develop into a cyst-encased metacercaria. If the cystests are consumed by an animal, the metacercarium bores into the liver of the new host where it will remain until maturity. As they grow, liver flukes feed on liver tissue of the mammalian host while larvae feed on the digestive gland of the snail host.

Liver flukes have their most damaging effects to farmers raising cattle or sheep. Because cattle and sheep are graising animals, they are at a high risk of consuming metacercarium cysts. Once infected, livestock can contract potentially fatal diseases such as liver rot or black disease.  The loss of cattle and sheep livestock ultimately results in results in economic losses for farmers.