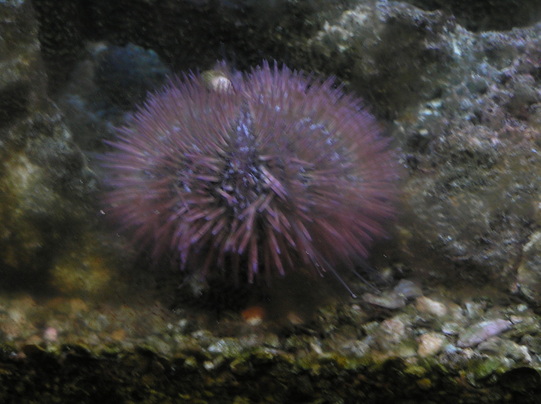 The common sea urchin is an invertebrate with a large rounded shell-like external skeleton referred to as a test. This exoskeleton is composed of calcareous plates. It varies in color from pinkish-red to yellow, purple or green. Individuals that live in shallower marine waters tend to be more flat than individuals living in deep water. The test is covered in many spiny bristles that serve as a protection mechanism from predators. They feed on seaweeds and other invertebrates. They are able to move from place to place via tube feet. Breeding takes place in the spring through external fertilization between male and female individuals.

The common sea urchin is widespread off the coasts of Britaina and also has a range that extends along northern Europe. They can be found in high densities in offshore areas on rocky substrates.

The common sea urchin is also referred to as the edible sea urchin. The gonads of both the male and female sea urchines are eaten in areas around the world. The possibility of rasing sea urchins using aquacultural methods is also under investigation.