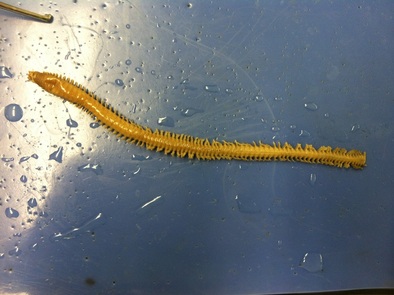 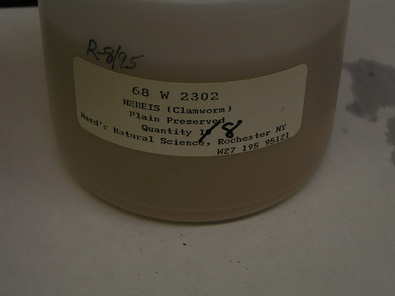 The Clamworm is a segmented annelid worm. Its segments are wider than they are long. The prostomium has two antennae and a pair of palps differentiated into two units. The pharynx is delineated into two parts with a pair of stout jaws and conical teeth. Their are usually a two pairs of eyes present in most species of Clamworms. Coloration is greenish to greenish brown with slight blue tone. It can grow to a fairly large size at 30cm long and 1.2cm wide. They usually eat algae and have large jaws with an eversible pharynx used to tear their food from hard surfaces. Reproduction is done through the release of body parts called epitokes that make their way to the surface in mating swarms. After spawning, the male and female epitokes die.

Clamworms can be found from Alaska to San Diego as well as the Pacific coast of Russia in the mid to low intertidal zones. They can be found amongst mussels and barnacles, on pilings, sandy mud and algal holdfasts.

The Clamworm is a common fish bate used by anglers.