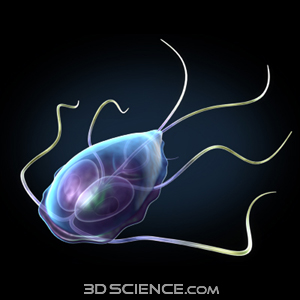 Giardia is a parasite species that can be found on surfaces or in soil, food, or water that has been contaminated with feces from infected humans or animals. They are protected by a hard outer shell that allows it to survive outside the body of their hosts for long periods of time. Once inside the body, it colonizes and reproduces inside the body by attaching a ventral adhesive disk to the walls of the gut. They absorb most of their nutrients from the lumen of the small intestine.

Giardia infect humans, cats, dogs, and birds. It is most common in tropical areas with poor sanitation.

Giardia cause a disease called giardiasis in humans. It is most commonly transmitted through contaminated drinking water.

"Parasites-Giardia". Centers for Disease Control and Prevention. Retrieved from: http://www.cdc.gov/parasites/giardia/.